Skip to content
Skedvi Bröd / Our Knäckebröd bakery / Our aquavit

OUR AQUAVIT IS THE BEGINNING OF A NEW TRADITION

Skedvi Bröd Aquavit has that typical cumin, fennel and aniseed taste that is added to pure spirit to create a well-rounded and flavourful brännvin. Skedvi Bröd Aged Aquavit gets its character from being stored in whiskey barrels during all four seasons. This gives it a milder and more well-rounded taste.

The idea behind our aquavit was born out of a vision for sustainability where our bakery has as little waste as possible. We like experimenting. When we drove the first 500 kg batch of waste bread to Tevsjö Destilleri in Hälsingland to test it out, no-one knew whether it would even work. The bread was left to ferment and, as it turned out, it worked really well! Even better than expected in fact. It had the same properties as the grain that is normally used.

Now, we’re one of just a handful in Sweden who are making their own spirits, with ours being distilled at Tevsjö. The aquavit is produced carefully and cleverly using the parts of the knäckebröd the bakery doesn’t use. In fact, that was the entire idea: that not a singe crumb should go to waste. 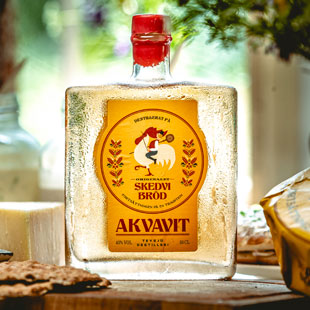 THE BEGINNING OF A NEW TRADITION!

This aquavit is produced carefully and cleverly using the parts of the knäckebröd the bakery doesn’t use. All so that not a single crumb of knäckebröd goes to waste.